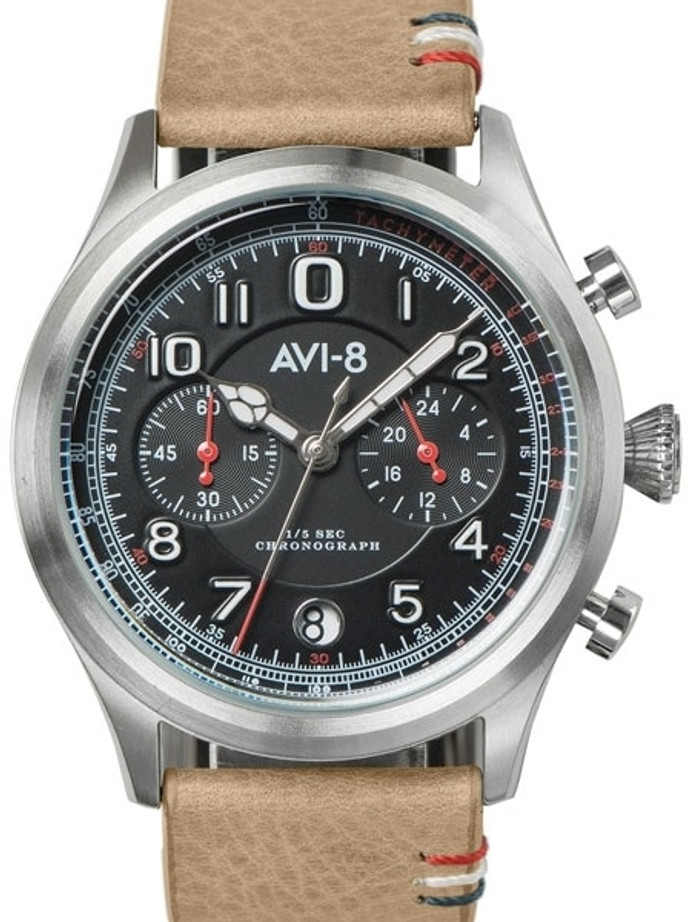 The 38 pilots of the Lafayette Escadrille, who flew for France beginning in 1916, before the United States entered World War I, were the very nucleus of the U.S. Army Air Service when it was formed in 1918. They are often referred to as “the founding fathers of American combat aviation,” yet few Americans know their names.

In an homage to the Lafayette Escadrille, Avi-8 embraces the true essence of the “Flyboy” moniker. Young, brash, bold, reckless but heroic and deeply drawn by a sense of duty as much as adventure – it was indeed the few and the brave of the Lafayette that gave rise to the name which has become synonymous with the Avi-8 timepiece collection.

With a sensibly proportioned 43 mm case – the Flyboy has been designed to echo an early 20th century pilot watch fused with the modern day functionality and precision of the Avi-8 range. A solid 316 L stainless steel case is affixed with a beveled hardened mineral lens that subtly magnifies the dial. The dial is perfectly proportioned to give both a classic and vintage appeal. Hour and minute hands work excellently to complete the Lafayette. The Japanese VK64 “Meca-Quartz” chronograph movement has a smooth seconds hand when the stopwatch function is engaged. A sub-dial at 3:00 shows you the time in 24 hours and the chapter ring is a tachymeter scale.

The genuine leather straps underlining is hand-stitched with the famous color of the French tri-color to pay another subtle tribute to the legend of Lafayette and the heroic band of roguish men from France and America who would comprise this epochal group of airmen. This is a handsome, pilot inspired timepiece leaning on a heroic history yet utterly modern in performance and build.
Download Product Manual