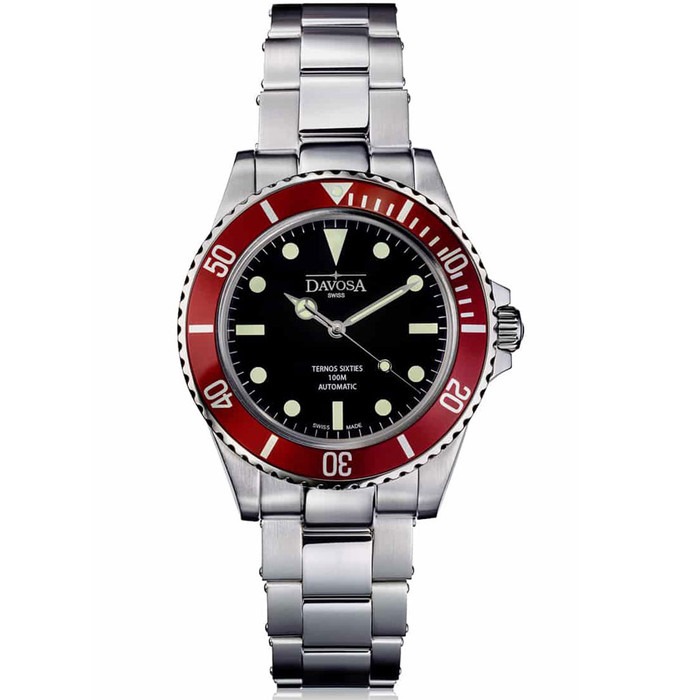 DAVOSA is reviving the spirit of the 1960s with the Sixties edition of their popular Ternos diver’s watch. In this edition, DAVOSA focuses not only on materials and design but also on how the watch feels on the wrist, in a bid to revive the carefree decade during which freedom in lifestyle and fashion became so important.


The case of the Ternos Sixties is made entirely from corrosion-resistant 316L stainless steel. It is shaped like a lens, and fits snugly onto the wrist: The screw-down back domes several millimeters, concealing the Swiss DAV 3021 automatic movement. The dial is protected by a domed anti-reflective crystal, a typical characteristic of the 1960s watch design. A uni-directional burgundy color bezel underscores the vintage look.

Today’s high-quality metal watch straps generally comprise of individually screwed links, with screws that are sunk into each link, rendering them almost invisible. In the last century, however, functional watches frequently featured visible rivets, which were easily recognizable by their raised profiles along the outside edge of the links. DAVOSA has given the Ternos Sixties a metal strap that revives this classic look. In keeping with the times, however, the rivets of the lower links are nevertheless screwed to enable easy watch strap adjustment.

With a case diameter of 40mm, the Ternos Sixties adheres to the more moderate case sizes of earlier decades. It displays a slender height of 12mm, despite the domed crystal and diver’s bezel. This is achieved through an elaborate case construction, with a case head that weighs only 58g including movement and dial. The metal strap adds a mere 68g, as the 3mm thick links taper from 20mm to 16mm, another nod to the prevailing fashion of 70 years ago.